Making an viola has been on my wish list for a long time. On the basis of a drawing of the viola made by the Amati brothers in 1620 I had started building the sound box. It concerns an almost 17″ viola and is therefore one of the larger Violas.In this period my attention was drawn to the project “Five Stringed Tenor Viola” by Thomas Riebl.

He had a 5-string Tenor Viola made with an extra string tuned as F (88 Hz) in addition to the usual C, G, D and A strings. The F-string sounds a fifth lower than the C string.

I thought that was too much of an opportunity to miss. In the design I extended the screw case a bit, so I could get rid of 5 tuning screws, adjusted the own frequencies of the sound box and went looking for a good F-string. 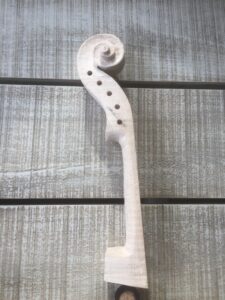 That good F-string came from the company Thomastik. An experimental string with a good sound and in terms of sound volume it corresponds with the 4 other (normal) viola strings of the Dominant type, also made by Thomastik. The string does need a lot of string power and an extra heavy bow. (For comparison: The string sounds one tone lower than the G-string of the Cello)

The low F-string added to the viola gives a great extra value to the sound. But…….

In the representation of the Sonata in A minor “Per Arpeggione” by Franz Schubert, by Thomas Riebl on his 5-string Tenor-Alt violin, I hear that the low string is used. However, in the sheet music I found, the low notes have been removed by octaves. Thomas Riebl plays these “by Arpeggione” by heart, as he knows the piece from time immemorial. And that’s with the bass notes. The 2 other pieces he has recorded on his CD are: the Trio for Violin, Viola and Tenor-viola opus 31 by Sergei Taneyev and the Suite no 6 for solo Cello BWV 1012 by Johann Sebastian Bach. Of these two pieces I have ordered the sheet music and I hope these pieces are complete with the low notes.

Fixed part of the building process of ‘The White Violin’ is improving the sound and playability based on the reactions of violinists (m/f). Hans Stoelinga is an Alto player and had the Tenor in house for a while to try it out. His tips for improvement were in the following areas. The F-string strikes heavily. The curvature of the bridge is insufficient, which makes it (too) easy to hit two strings at the same time. And the A string sounds too ‘thin’. As for the heavy bowing of the F-string, this does not seem to dissolve for the time being. Thomas Riebl also indicates that this string requires a heavy bow and a lot of ‘flexibility’ from the viola player, because of the alternation in the force. The curvature of the bridge has been adjusted by giving the fingerboard more curve and placing a new bridge. The sound of the A string has been improved by adjusting the bridge and soundpost.

In short, the Tenor Viola is ready for its next adventure. Are you or do you know an viola player looking for a tenor challenge, feel free to contact us.

Want to know more about the project ‘Five Stringed Tenor Viola’ by Thomas Riebl? Click below:

https://www.youtube.com/user/SNVideoreporter article about the project