Houtsma builds a tone from the root and the harmonics. From the 10th harmonic the sound of the violin becomes recognizable.  “Stradivarius had a large ‘Batting average’, a high percentage of violins with a good sound.

It is said that three eigenfrequencies from the bottom and top, before merging, are of great importance. M(odus) 1 is the frequency caused by the torsion of the leaf. M2 is the lowest frequency of the vibrations perpendicular to the grain. The width of the sound box at the wide lungs. M5 that of the longitudinal direction of the grain and thus the length of the sound box. The so called baseball suspension.

Modes 2 and 5 from top and bottom equal ==> violin better

Note: the documentary can be watched via “teleblik”.

Hold a top between two fingers, tap it with a knuckle and you’ll hear one or two beats. No one can know if the Cremonese builders used this technique to systematically tune the blades, but it is certain that from the early years in the 19th century there was an interest in these clones.
In the sixties Carleen Hutchins took a top of a Stradivarius violin. She discovered a connection between the M2 frequency and that of M5 and that there was an octave in between. Since that time there is a lot of debate about the meaning and importance of this phenomenon. In the standard violin making collection the aspect is not discussed. Also the weight of the blades is not discussed much. Curtin says about the latter: “I never thought of weighing a top until Hutchins proposed it in 1986”. Hutchins determined the frequencies by placing the sheet of fine powder on top of a loudspeaker. At certain frequencies the powder took on a pattern. In the figure below you can see the patterns of an M2 and an M5 tone. 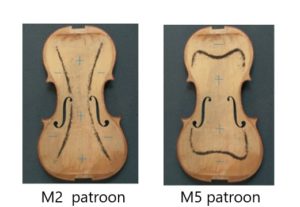 The glitters show the knot lines, the places where the blade has no defection. The + and – indicate that these areas are in counter-phase. When the + comes up, the – area goes down.

Each object you tap emits sound of a certain frequency, or rather multiple frequencies. The so-called body resonance. There are dozens of these for a violin. Especially the second (M2) and the fifth (M5) are interesting for the violin because they are directly related to the stiffness of the wood in the direction along the grain (longitudinal direction of the leaf) and perpendicular to it. And the speed of propagation of the sound in a material depends in turn on the stiffness of that material. Violin makers often determine the stiffness, or flexibility, by bending the blades with their fingers in several directions. Or to be able to work more accurately by measuring the distortion at a certain force with a micrometer.

Examples of these frequencies are top knock tones.

As far as the weight of the blades is concerned, Curtin notices that they are so low. On average about 65 grams and that’s 20% lighter than he normally makes.
As far as taptones are concerned, Curtin indicates that the tops he makes also have an average M5 frequency around 309 Hz. And that’s not surprising, because that’s what he tunes them to. The corresponding M2 frequencies then come out around 155 Hz, while those of the above violins are around 133 Hz. That difference can be explained to a certain extent by the lower curvature of his newly built instruments and larger thicknesses of the central part of the top. Also with a replica of the ‘Booth’ Stradivarius that was exact in form, it turned out to be difficult to get the M2 below 138 Hz, without sacrificing the M5, while the M5 is 127 Hz with the ‘Booth’.
Curtin argues that M2 is linked to the stiffness across the grain, giving the idea that the wood used by the Stradivarius and other Italian builders has a higher longitudinal grain stiffness than the new wood.
The stiffness across the grain is highly dependent on the cutting edge (pure quarter sawn or not) and this could be explained by the direction of sawing. Curtin does not believe this is the explanation, but does not have enough data to investigate it.

Reasoning further from the data in the table, Curtin states:
In general stiffness at resonances is proportional to mass. The ‘Stretton’ has in comparison with the ‘Booth’ a 20% greater mass, while the M5 frequencies of both instruments vary less than 1%. In the same way, the ‘Booth’ and the ‘Kreutzer’ have a mass difference of about 3%, while the M5 frequencies are about 10% apart.
Assuming that stiffness is proportional to the square of the frequency. This means that a relatively small difference in frequency gives a considerable difference in stiffness.

The whole story has to be qualified because the different plates are not identical in shape and stiffness distribution.
Curtin’s definition of stiffness number is for a certain mode:

Violin maker Nigel Harris introduces another formula. Curtin uses the formula in a custom way. From the values in the table you can draw the conclusion that the Italian master builders used special values of knocking tones. At least that seems to be the case with the current values. Curtin does not draw the conclusion that taptones, stiffness and weight are unimportant factors. The question is: “which piece of wood do you need if you want to make a replica? Or which piece of wood do you need to repair an old instrument? Do you need to pay attention to density or stiffness or is there another size?
Curtin refers to John Schelling, researcher of ‘Bell Labs’, who uses the term Radiation Ratio.

Radiation Ratio of a material could be called the ‘stiffness per unit of mass’. The higher the Radiation Ratio, the greater the stiffness at a certain weight. You can determine it by dividing the propagation rate of sound in a material by the density of the material. You can measure it in any direction, but the length in the direction of the grain and perpendicular to it are most logical in relation to the M2 and M5 modes. Values from 12 to 16 are normal for new ‘spruce wood’. Then use wood with a low density, which has statistically the highest Radiation Ratio. If you have wood with Radiation Ratios that match the old wood in both directions, you can use it for a replica or repair. It calculates some values of the Radiation Ratio on the back of a cigar box. That gives the following table.

Finding wood with the low value of around 14 is easy to do. Finding wood with a value of around 16 is much more difficult.
The last remark Curtin makes by stating that also the damping factor in the wood still plays a role. This means that two violins with exactly the same shape, taptones and weight do not have to sound the same. The damping determines to a large extent the quality, response and volume of an instrument. And in contrast to the frequency of the taptones and weight, it is difficult to measure, especially in the higher frequencies of an instrument.
Nevertheless, Curtin believes in measuring taptones and weight as a means to build better violins.

The pictures and tables are taken from Joseph Curtin’s article, The Strad Oct 2006.