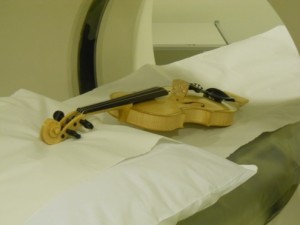 Figure 1; violin in the CT scan

Does a violin sound different when it is older? It is a fact that the sound of a bowed instrument depends on the suppleness of the sound box. Older instruments have the name better, read warmer and fuller tone, to sound. Are these instruments more supple built or could it be that the wood becomes more supple, less stiff, with the passage of time?

In this research the density of the wood of a ca. 200 year old copy of a Gagliano instrument is compared to that of a young own built, good sounding instrument.

We do this research by means of a CT-scan, so that we can look ‘in the wood’ as it were.

Gagliano in scanWe successively discuss the concepts used, the working method, the results and the conclusion. We also look ahead to see which research is useful as a follow-up. Fig.2 Gagliano copy in the scan

Now there are at least two types of density. First, the most commonly used term in physics, or density is mass per unit volume. In formula form:

Water is the reference point, water has a density of 1.0 g/cm3 . A substance with a density greater than 1.0 g/cm3 sinks in water, a substance with a lower density floats. Now it is practically difficult to take a piece of wood out of the violin, weigh it, determine the volume and then calculate the density.

In this research we therefore work with a different definition of density. That is the density of a material in the sense that it allows more or less radiation through. This approach is used in the hospital for an X-ray and a CT scan. We made a CT scan of two violins and a few test cubes. In the CT scan, the density of the material can be measured by looking at how much radiation is passing through the material. The source of the radiation is on one side of the object, the detector on the other side. Source and detector rotate together in a large ring around the object and the computer calculates on the basis of the remaining radiation, how much was absorbed. In this way a lot of ‘pictures’ are made and in our case we got about 200 cross sections of the violin in the picture. If no radiation is absorbed, you can see black on the image, e.g. with air. The more radiation is absorbed the lighter the image. On the basis of the gray tone the computer determines the density. In this case in the Hounsfield Unit (HU). Air has a HU value of -1000, water of 0 and here a dust with a density of -200 HU would float and a dust with +200 HU would not.

The values of this density according to the CT-number with a unit HU are not one on one comparable to the density in gram/cm3 . I therefore only compare the values relative between the different CT-numbers in the different wood measurements.

Below are four more cross-sections. You also see different grayscales. The darker the image, the less X-rays are absorbed. E.g. sky is black or dark gray.

On the left image a cross section of the neck. The ebony on top is white, the less hard maple underneath is gray.

The computer program contains several functionalities. One of them is the possibility to read the gray scales in the so-called Hounsfield Unit, abbreviated to HU.

As an example of the way of working, here are the measurements in HU of air. At the top of the table are 12 measurements in a frame. The range from 1006 to 1008. In the row below the same values are shown again, now sorted by size. In the row below are the differences (in red) of the extreme values with the preliminary average of -999. This makes it easy to exclude the two values with the largest deviation. The remaining 10 measurements (blue) are used to determine the final average. In this case -1002

Measurements on the sound wood

In general, three types of wood are used for a violin. The back, sides and neck are made of maple. The top is made of spruce and the fretboard of ebony.

From the different types of wood in the Gagliano copy as well as from the homemade violin from 2011 I made 2 series of measurements. Always according to the approach as described above. A series consists of 12 measurements, of which the two most deviating ones are deleted. These measurements are shown in the appendices.

The average values from the series are listed in the following table.

For these measurements applies:

The hypothesis in this research is: ‘the density of the sound wood of an old violin is lower than that of a new violin’.

We can say that this is true for this couple of violins.

There are a number of remarks in this respect.